Autonomous Vehicles and K40 Laser Defusers: What You Need To Know

We were recently asked by a K40 dealer if LIDAR (Light Detecting And Ranging) technology use in autonomous (self-driving) vehicles might cause our Laser Defuser™ laser jammer products to give false alerts.

K40 has not received a single report of vehicles with LIDAR-based autonomous capabilities causing a false alert or any performance issues with our Laser Defusers.

That said, we are vigilantly staying abreast of LIDAR technology developments and use by vehicle OEMs to ensure K40 Laser Defuser owners remain confident they are fully protected against police LIDAR speeding tickets.

How LIDAR Is Used in Autonomous Vehicles

To create a self-driving vehicle, manufacturers equip it with sensors that create a virtual 3D map of a driving environment. LIDAR is one technology that’s been tapped to provide a high-resolution image of roads, bridges, landscape changes, and potential road hazards.

LIDAR in a sensor application bounces millions of 905nm wavelength laser light pulses 360° off nearby objects each second and measures the reflection back. The distance to various objects is 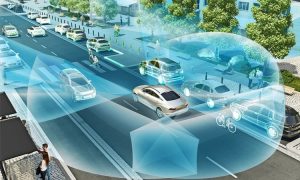 instantaneously calculated by the LIDAR sensor’s software and the millions of light pulses (or data points) generate a 3D “map” of the surrounding driving environment. A complete LIDAR system for use in a self-driving vehicle consists of a laser source, a photodetector, data processing electronics, and motion-control equipment.

Currently, two types of LIDAR systems are used in autonomous vehicles and are classified by how they scan the driving environment: 3D flash and Scanning. 3D flash LIDAR uses a wide-angle source and wide-angle optics to focus all the reflected light from one exposure onto the detector. This data is used to create a map of the surroundings based on time-of-flight calculations.

Conversely, a scanning LIDAR system emits light sequentially in every direction and detects each individual light reflection one by one to map its surroundings.

Simply put, to combat a police LIDAR gun, a countermeasure such as the Laser Defuser must first detect the 904-905 nanometer wavelength infrared (IR) light beam being sent from a 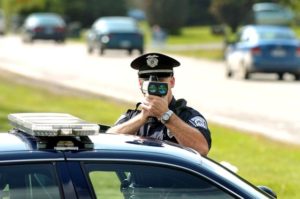 police laser gun at a fixed or variable pulse per second (PPS) rate. After detecting the police laser gun signal, the Laser Defuser system transmits its own signal to temporarily “confuse” the laser gun and prevent it from getting an accurate speed reading.

No Falses: It All Comes Down to PPS

PPS is the rate at which any LIDAR-based measurement device emits to obtain a reading of an object. Police laser guns emit short 905nm light pulse bursts – anywhere from a few pulses per second to thousands per second – to take distance measurements to calculate a vehicle’s speed. The Laser Defuser system software is programmed to look for and react to police laser guns’ PPS and ignore all other light sources, including the 905nm light emitted by autonomous vehicle sensors.

Alternatively, automotive LIDAR pulse per second rate is in the billions. That PPS rate is the key reason autonomous vehicle LIDAR systems are not causing falses with Laser Defuser laser defense systems and/or police laser guns.

Eliminating even the remote possibility of vehicle LIDAR use negatively affecting laser jammers is the auto industry’s realization that 1550nm wavelength systems offer more robust and accurate LIDAR performance. 1550nm LIDAR systems can deliver 656 feet range for dark objects which is ample distance for vehicles traveling at highway speed to safely stop if the onboard guidance system detects a hazard. Another key benefit to 1550nm LIDAR is that its wavelength is absorbed by the eye so it never reaches the retina as opposed to 904-905nm systems which could cause eye damage. That safety concern could be one reason why 1550nm laser diodes are often selected for military applications such as night vision goggles. With vehicle and occupant safety a paramount objective to manufacturers (and their insurers) and the price per sensor coming down to affordable levels, high-powered 1550nm LIDAR systems could become the future industry standard for laser-guided vehicle systems/operations.

Medium: How Lidar Works?—and Why It’s an Essential Component of Autonomous Vehicles

DesignNews: Four Challenges for LIDAR on the Road to Autonomous Vehicles