The truth about how they work, where they are, and how you can protect yourself from these tickets.

Although red light and speed cameras pose a unique threat to some drivers in some areas, the following are some facts and tools that can help drivers identify the risk in their area and help avoid these revenue-generating machines.

K40 Electronics has extensively researched this specific ticketing form and engineered our products with options to minimize a driver’s risk without requiring a subscription-based, downloadable database that needs frequent updating.

By law, these cameras must be well marked, giving drivers advanced warning of their use in the area. Still, the facts show that these cameras generate substantial revenue for some cities, municipalities, and states, and their use will likely be maintained or increased.

How do red light cameras work?

Red light cameras do not use radar.

According to the City of Chicago, which has one of the highest concentrations of these:

“The red-light enforcement high-resolution digital cameras are integrated with the traffic signal system and use 3D cameras to detect vehicles approaching the intersection. When the cameras identify a vehicle entering the intersection after the signal has turned red, they record still photographs and video footage of the vehicle, including the rear license plate.”

While most municipalities will site that these cameras have been put in place to minimize “red-light running” and avoid crashes, statistics state that 95% of all tickets issued at a red-light camera are for not coming to a complete stop before making a right-hand turn. Learn more about how red light cameras rake in revenue on our previous blog post.

An important thing to note is that these tickets (which you receive in the mail) do not count against a driver’s license or increase insurance premiums, and municipalities are playing the odds that most drivers will just pay the fine ($50 – $100), making these cameras an essential part in their revenue streams.

With K40’s Mark to Alert feature on its Platinum Series Radar Detectors, a driver can easily “mark” the location of the red-light cameras they choose to be alerted to, such as ones where the driver might make a right-hand turn.

How do speed cameras work?

Speed cameras use radar and video.

According to the City of Chicago: 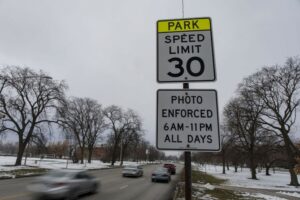 “The camera system uses a 3D tracking radar, high-resolution digital camera, and high-definition video camera. The 3D radar identifies any vehicle traveling faster than the posted speed limit and triggers both the camera and the video which capture the event. The first image shows the vehicle driving in excess of the speed limit. As of January 1, 2020, Chicago had 161-speed cameras deployed at 68 Child Safety Zones (areas within one-eighth of a mile of a park or school.”

As with most areas, these cameras are permanently mounted in or around “child-safety areas” and are clearly marked. 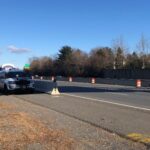 Again, K40 products allow you to Mark To Alert those areas you regularly travel through so that you are alerted when approaching one of these cameras to remind you to check your speed.

You may also encounter some speed cameras in construction zones or other areas that are mobile devices placed in vans. For these mobile threats, K40 recommends using the free google app WAZE, which is a crowd-sourced alert system for the presence of actual police or mobile cameras.

Another technology of speed cameras known as MRCD (MultaRadar Compact Distance), and MRCT, are cameras that use a low-power K-band signal that modulates its frequency, making it difficult for radar detectors to detect and alert drivers to their presence. These devices are primarily used in Alberta, and Quebec, Canada, with minimal use in New York City, Washington D.C., and Chicago.

K40’s Platinum Series radar detectors have the option to enable MRCD/MRCT detection. Suppose a driver chooses to turn this feature on. In that case, K40 recommends turning on the MRCD Filter option to minimize falsing when the detector is sweeping for these low-power K-band modulating frequencies.  Since these MRCD cameras are low-powered, drivers who have turned on the MRCD/MRCT feature will still get limited range of these cameras.  Again, your best defense is using the Mark To Alert feature or the WAZE app.

Knowing the facts can help you avoid camera tickets, but how big of a threat are these cameras?

According to Readers Digest:

“The bottom line is that they’re not all that common. “They are very expensive to install,” Westover says. “Most jurisdictions have the cameras installed on their most dangerous intersections (those with a higher percentage of crashes due to violations).” Reischer adds that a rural area without much heavy auto traffic may not have any, while a busier urban area “could easily have 15 percent or more of their traffic lights with a red-light camera.” That’s still probably fewer than you might think, though.”

The Insurance Institute for Highway Safety has compiled a report on which states use this Automated Enforcement technology and its legalities, penalties, and provisions.

Search for your state.

Although not the most significant ticketing threat today’s drivers face, K40 believes it’s essential to keep drivers aware that there are more threats on the road besides police radar and laser. Being aware of these threats and using your K40 radar detector’s customizable features will save you some $$$ on the roads!