How to Beat Police Laser Guns

Why You Need Multiple Transponders in Today’s Laser Wars

Recently, a K40 owner with an older but still effective radar/laser system contacted us with a concern. His K40 authorized dealer had recommended two Laser Defusers be installed on his new vehicle and the K40 owner’s belief (from past experience) was that only one transponder was required for effective protection. While we were able to explain the facts and our beliefs to him satisfactorily via a telephone conversation, this interaction made us realize we needed to create a “state of the industry” report for any driver interested in beating police laser (LIDAR) guns. 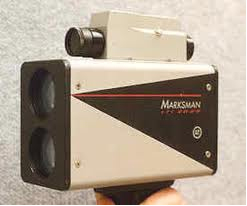 was introduced in 1991. It was a bulky, five-pound heavyweight and could only produce a single shot. To protect drivers from this new threat, K40 introduced the world’s first countermeasure, the Laser Defuser™ laser jammer three years later. This police laser gun jammer was mounted in a factory-looking license plate frame for two reasons:

1. Police were trained at the time to aim specifically for the license plate as it was the most reflective surface on the front of a vehicle.
2. The laser guns produced a semi-narrow beam of 3 – 4 milliradians (mR).

The latter point is key in understanding what was effective in jamming device placement in the past and what’s needed present day.

Laser gun targeting is typically done at 1000 feet or less because of a NJ Superior Court ruling in 1998 that stipulates, among other factors, laser gun speed readings made at distances up to 1,000 feet are admissible in court. Readings obtained in excess of 1,000 feet shall be admitted only with supporting evidence and expert testimony.

The “1,000 Foot Rule” as it became known was created partly because of the beam divergence created by laser guns. A 3.5 mR laser beam will create a beam width on a targeted vehicle at 1,000 feet of 42 inches (3.5 feet). If three vehicles were traveling together at 2,000 feet, it would be impossible for a police officer to visually identify if one was speeding, pinpoint its exact location on the roadway, and then validate its precise speed with a laser gun as the beam spread of seven feet could be measuring the speed of a non-targeted vehicle.

What that all boils down to was based on the targeting location (front license plate), the standard targeting distance of 1,000 feet, and beam divergence of 3.5 feet, most vehicles only required one laser jamming device in the past to ensure adequate reception coverage on the front of their vehicle.

The Rules of Engagement Have Changed

To possibly give police officers an upper hand in the laser gun versus laser jammer battle, many laser gun manufacturers have begun offering guns with 2.5 mR. 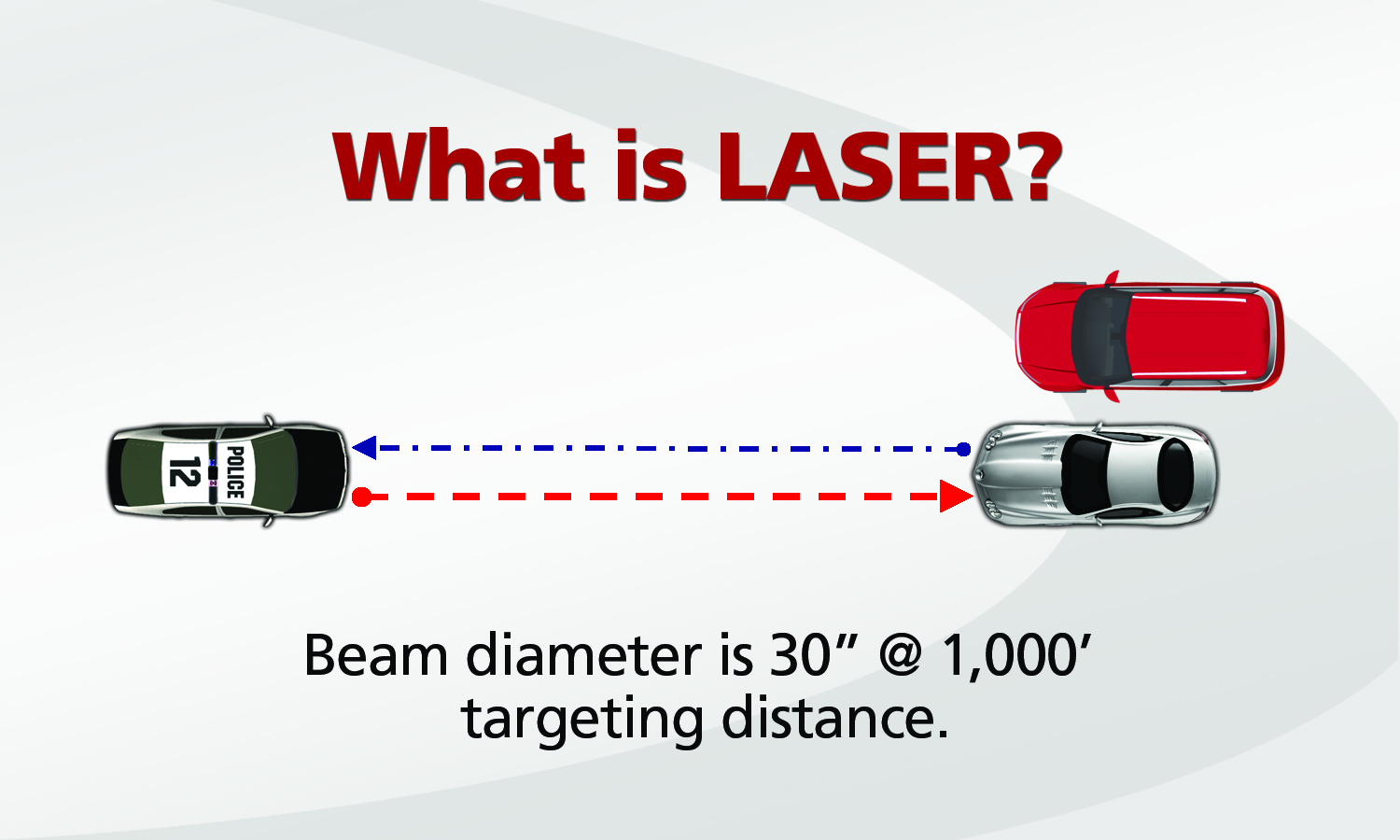 And that beam gets even smaller very quickly on moving vehicles. For example, a vehicle being driven at 70 mph is traveling at 102.67 feet per second. So in roughly five seconds, that beam is now only 15 inches (1.25 feet) wide. Why does that matter? Simple, the narrower the beam, the harder it is for a single license plate mounted laser jammer to detect a police laser gun.

Compounding matters is that police began shifting their targeting from the license plate. According to Carl Fors, a NHTSA compliant master radar and laser course instructor and expert court witness in speeding cases, it is possible to target headlights and reflective/chrome grilles.

With all of these considerations in mind, K40 recommends drivers protect their vehicles with a minimum of two Laser Defusers. Certain oversized vehicles (trucks, SUVs, etc) would benefit by having three or more laser jamming modules installed for maximum surface area coverage. 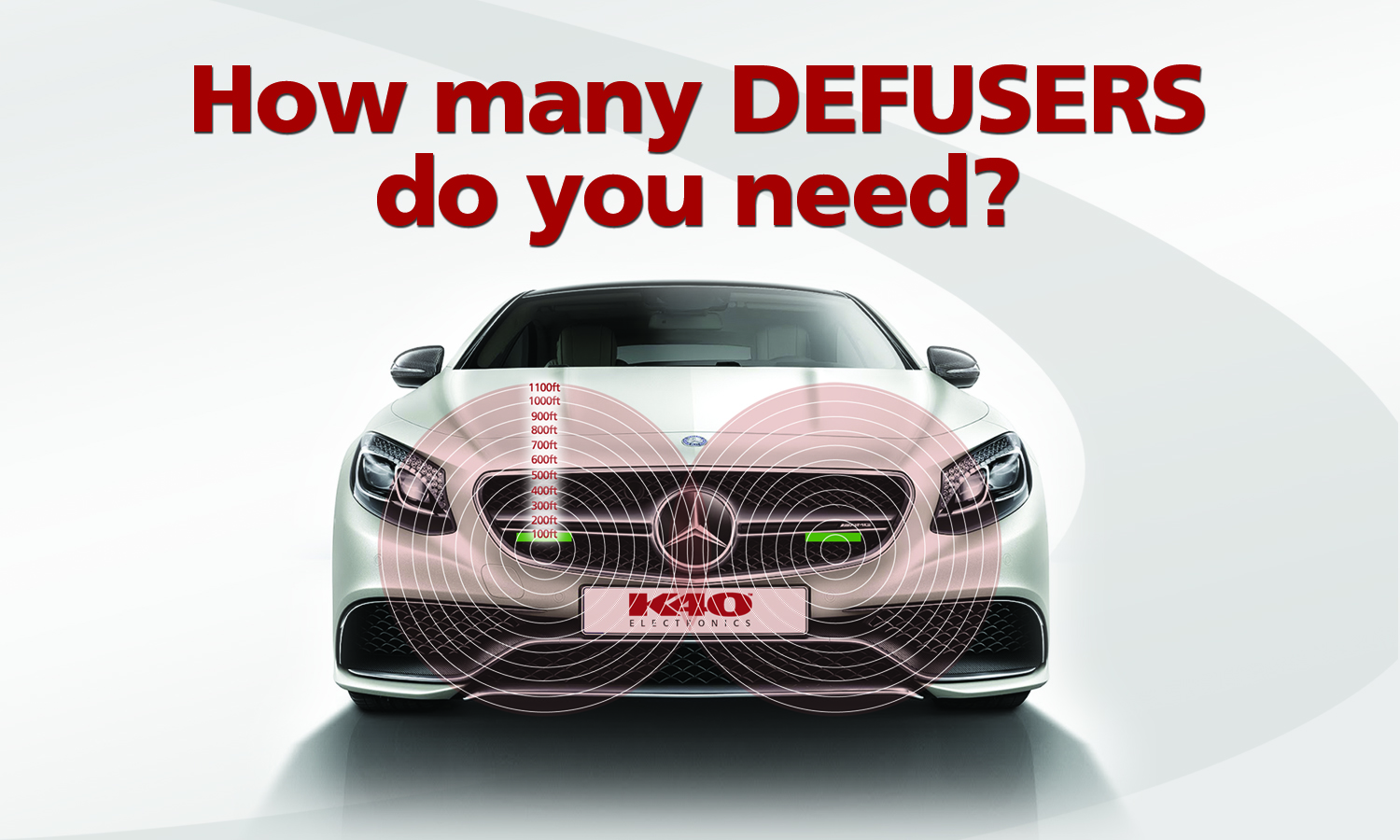