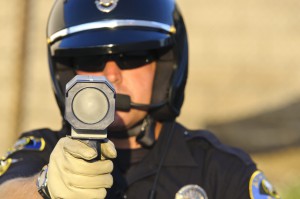 In our last post, we provided a little insight into police laser in order to help you become a more informed motorist. This time around, we’ll focus on the ins and outs of police radar. We all know that police run their radar to catch fast drivers, but what exactly is radar, and how does it work? If you’re asking these questions, you came to the right place. Welcome to “Radar 101.”

RADAR (Radio Detection And Ranging) has a variety of uses, from weather forecasting to enforcing the speed limit. We’ll focus on police radar and how officers utilize it for traffic enforcement.
Most police cruisers are fitted with a single-antenna radar unit that points in a single direction, and this unit has the ability to operate in either a stationary position or while the cruiser is in motion. Usually, if the officer is near you and his car is fitted with radar, then your detector will alert you to his presence. It’s important to remember that not every officer drives around with his radar in use. Oftentimes, you will pass a police officer and receive no alert from your radar detector. This does not necessarily mean that your detector is malfunctioning; it just means that the officer passing you is not running his radar at that time. A radar detector detects radar; it is not a “police detector.”

Police radar transmits radio waves on a specific frequency, and the three frequency bands currently in use (in North America) are X-band, K-band, and Ka-band. X-band is nearly obsolete, yet maybe encountered near automatic doors or in rural areas with small police departments. K-band is a more common police band, yet it is also emitted from non-police sources such as vehicles equipped with driver’s assistance packages (Audi’s Collision Avoidance system, for example). Ka-band is the newest radar band in use, and it almost always indicates the presence of a police officer.

We’ve established what police radar actually is, but how does it work?

When the radio waves from the officer’s radar gun strike a vehicle, some of the signals are reflected and bounced back towards the gun. The radar gun analyzes any changes in the signal’s frequency to calculate a speed and then displays the speed to the officer.

Occasionally, officers will use a sinister technique called “Instant-On” or “RF Hold.” During this type of encounter, an officer will wait until a targeted vehicle is within range to send a quick burst of radar to clock the vehicle’s speed. Radar detectors are able to alert to these brief, weak signals, but you must be vigilant and react quickly.

When deciding which radar detector to purchase, consumers generally research a wide range of topics regarding performance and features that the detector will provide them. The range is one such topic. “Range” refers to the distance in which your detector picks up a police radar signal and begins alerting to the presence of radar. Trying to estimate a warning time in an actual mile or foot measurement is impossible since true warning time is influenced by many outside variables that have nothing to do with the radar detector itself. For example, weather, the strength of the radar signal being transmitted, the direction the gun is pointed, the length of time it is transmitting, the position of the patrol car, and the influence of other objects around you may all affect how your radar detector receives a signal. For these reasons, don’t expect your detector to achieve the same warning distance (“range”) every time that you encounter police radar.

Radar detectors give you the opportunity to reduce your speed by alerting you if you are nearby any radar sources. Radar detectors do exactly what their name implies: detect radar. They do not jam radar, as the Federal Communications Commission has banned the sale and use of radar jammers since 1997.

An alert driver with a quality radar detector can defeat most traffic enforcement tactics, no matter how sneaky the officer may be. However, there are a few areas where motorists should exercise extra caution. For example, you should be cautious when cresting a hill or rounding a corner. Radar cannot travel over a hill or around curves unless the waves are reflected off of a nearby object and towards your vehicle.

With this information, we hope that you now have a better understanding of how police radar works and how it is used to enforce speed limits. If you are alert and heed your detector’s warnings, you will greatly increase your chances of remaining ticket-free while still driving without limits.

We have several protection options to fit any driver, from portable to custom-installed systems. Interact with us in the comments or give us a call at 800.323.5608 to learn more about our radar/laser protection systems and to find a dealer to become protected. You’ll be driving ticket-free in no time!