K40’s Consult Line is a unique service available to all drivers with questions regarding police speed enforcement and protection options available. K40 takes phone calls 24 hours a day, 7 days a week, 365 days of the year. Our favorite thing is to talk to people about their cars, our products, and how we can help them avoid speeding tickets. 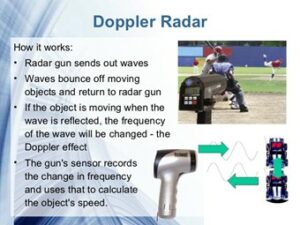 The short answer is YES! Police radar guns emit a radio frequency that uses the doppler effect to bounce off a target and return to the officer’s gun, giving them the vehicle’s speed. Radar gun frequency waves emitted from the officer’s gun travel a great distance and can be detected by a radar detector even before the driver can see the officer, giving the driver ample time to slow down and avoid a speeding ticket.

In the United States, the answer is mostly YES! Radar detectors are legal in 49 states and illegal for drivers only in Virginia, Washington D.C., and on military installations. Radar detectors are illegal in all commercial vehicles (vehicles over 18,000 lbs). Check for the provinces that allow radar detectors if you live in Canada.

What’s the difference between Police laser and Police radar? 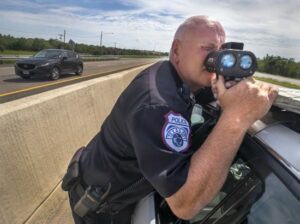 LASER: (Estimated to be 20% of all speeding tickets in North America)

RADAR: (Estimated to be 80% of all speeding tickets in North America) 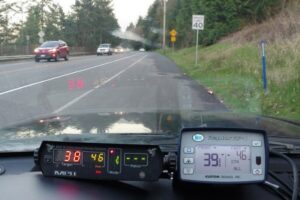 Do You Make A Radar And Laser Jammer?

K40 manufactures radar DETECTOR(s) and a laser JAMMER. The Federal Communications Commission has made radar jamming a federal offense with severe penalties and fines, so radar jamming is against federal law. The Food and Drug Administration has jurisdiction over laser use in the U.S. There is NO federal law against jamming lasers; however, some states have made laser jamming illegal. Call us at 800-323-5608 to find out if laser jammers are legal in your state.

I passed a police officer, and my radar detector didn’t go off. Why? 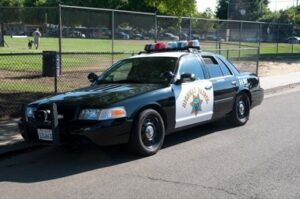 A radar detector is a passive device that constantly scans the airwaves for specific radio frequencies used by police radar guns. The officer must have a radar gun on and transmitting for a radar detector to pick it up. Not all police officers are on traffic duty or are driving a police vehicle equipped with radar.

I saw an officer holding a gun outside his car and my radar detector didn’t go off? 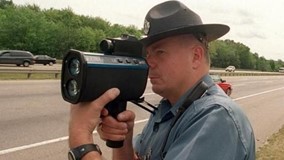 In this instance, the police officer was probably shooting a laser gun. An officer must be standing still and shooting outside his vehicle/window to target vehicles. When an officer is shooting a laser, it is pinpoint accurate and one car at a time. If the officer targets the vehicle next to you, your system will not alert. Only if the officer puts the cross-hairs of the laser gun on your vehicle will you be alerted. This is true ONLY if you have laser jammers. If you are using a portable radar/laser detector, the officer would have to shoot at the unit itself on your windshield or dash for the unit to alert you. This rarely happens. Even if your portable radar/laser detector alerts you to being a target of a police laser if you are speeding at the time, he has acquired your speed, and you will receive a speeding ticket. Only having installed laser jammers can prevent the officer from obtaining your speed.

Can I buy directly from you?

No, K40 installed products can only be purchased from K40’s independent retailer and car dealership partners. K40 authorized partners are the experts in component placement and stealth integration of custom-installed radar and laser systems into today’s complex automobiles.

Can you recommend a dealer for me?

K40 can make a recommendation for you based on your vehicle, product(s) desired, and your location, or direct you to K40’s website’s “Where To Buy” page, where you can look up dealers in your area and contact as many as you would like for pricing and installation.

How much does an installed radar and laser protection system cost?

Pricing will come from the authorized K40 retail partner you choose. They will give you a price based on the system components you choose, your specific vehicle, and the labor time needed to complete the installation.

My dealership said having a K40 system installed would void my factory vehicle warranty. Is that true?

Some dealerships have the misconception that having any aftermarket electronics added to your new vehicle will void the warranty. This claim is false and addressed explicitly in the Magnusson Moss Act, protecting drivers’ vehicle warranty rights. Since the 1980s, K40 has partnered with car dealerships so that new vehicle owners could have their K40 systems installed in their vehicles at the dealership before taking delivery.

K40 is interested in your complete protection and total satisfaction. Stay tuned for next month’s Part 2 of Frequently Asked Questions. If you have a question not covered here, or if you prefer a conversation with a real person, go ahead and give us a call. We would love to talk to you. Call us at 800-323-5608.

Have more questions? Read Part 2 Of Our FAQs.