How Police Get Your Speed Using Radar and Laser

If you’ve ever been pulled over for speeding, you know the feeling; your heart races, and your palms get sweaty. You’re not alone. For every five drivers on the road, one will get a speeding ticket this year. Police write approximately 41 million tickets every year, generating about six billion dollars in revenue. That’s from speeding tickets alone! The two main ways police get a speed reading to write tickets are radar and laser. Radar and laser are very different, but they have one thing in common: they both are used to write speeding tickets that cost you money. 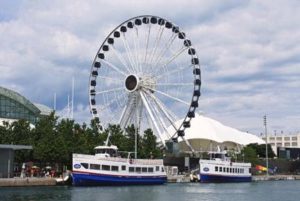 The radar beam coming from an officer’s radar gun is huge, approximately 200 feet in diameter at the normal targeting distance of 1000 feet. That’s about the same size as a Ferris Wheel, like the one at Navy Pier in Chicago. For this reason, radar is not pinpoint accurate. If a police officer shoots a radar beam at a congested six-lane highway, they won’t know for sure which car is speeding unless they can make visual confirmation.

There are different frequencies of police radar called radar bands. There are three bands of radar that are used by police officers in North America. The first is X-band. X-band is the oldest band of radar, scanning at about 10.525 GHz. Although X-band is not commonly used nationwide, it is still used by police officers in New Jersey and Ohio. For this reason, it’s still something to be looking out for.

The third band of police radar is called Ka-band. Ka-band scans between 33.4-36.0 GHz, a frequency used almost exclusively by police officers. So, if you have a radar detector and you hear “Ka-band,” you know it’s time to check your speed.

Radar is the most common way that police get a speed reading. This is because radar is very convenient for the police to use. Police can shoot radar any time they are in their vehicles. They can shoot radar while they are either stationary or moving. This means that they can have radar on for an entire eight-hour shift, writing tickets the whole time. Because of the radar signal’s size, early detection and warning are critical to avoid a speeding ticket. 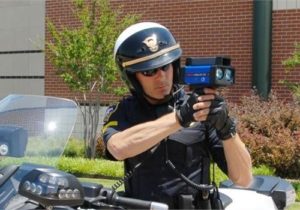 The second method that police use to write speeding tickets is laser. Police laser operates by emitting a short burst of infrared laser light and reflecting the beam off your vehicle and back to the gun. The gun then analyzes the quick “roundtrip” of the laser beam and reports your speed-reading to the officer. Police officers are trained to target vehicles from a stationary position at a distance of 800 to 1,200 feet.

Unlike police radar (which can typically be detected in advance), police laser pinpoints a specific vehicle and provides no advance warning. If you’re in the sights of a police laser gun, then the officer is attempting to receive a speed-reading from your vehicle only. He aims at a reflective spot (such as the license plate or headlights), squeezes the trigger on his laser gun, and receives a speed-reading almost instantaneously (if the vehicle does not have laser jammers installed).

How can police pinpoint one vehicle? Police laser beams are narrow and very accurate, measuring roughly 18 – 36 inches in diameter at the standard targeting distance of 1,000 feet. Although a police laser is more accurate than radar, it does have its drawbacks and limitations, which is why radar is more commonly used. Police must be stationary while shooting laser, and weather conditions can impact the officer’s ability to target a vehicle. This includes occasions when the sun is directly behind the target vehicle, nighttime, and even weather can reduce the device’s range.

Unlike police radar, early detection and warning are not possible from a police laser gun. The only defense from a laser speeding ticket is to have laser jammers professionally installed on your vehicle. Laser Defusers can buy you precious time to reduce your speed and avoid that ticket.

What You Can Do

Now that we’ve discussed the two main ways police write speeding tickets let’s talk a little bit about the measures you can take to avoid speeding tickets. The best way to protect yourself from speeding tickets is by getting a radar/laser defense system installed in your vehicle, complete with a radar detector and laser jammers. A radar detector will alert you to the presence of a radar threat so that you have time to slow down before the police officer can make visual confirmation that you were speeding. Because a police laser is pinpoint accurate, laser defense is a little bit different. Laser jammers, such as K40’s Laser Defusers, block or delay a police officer’s laser gun from getting a speed reading on your vehicle. This can buy you precious time to reduce your speed and avoid a speeding ticket.

If you have any questions about police radar and laser or how to defend your vehicle from speeding tickets, please visit K40.com for more information. If you’d like to speak to a K40 consultant about K40’s speeding ticket protection, please give us a call anytime at 800-323-5608.