“distracted driving is any activity that diverts attention from driving, including talking or texting on your phone, eating and drinking, talking to people in your vehicle, fiddling with the stereo, entertainment or navigation system—anything that takes your attention away from the task of safe driving.”

It could be fair to say distracted driving began after the 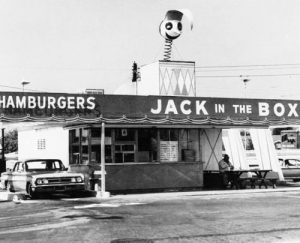 world’s first drive-through restaurant opened in the late 40’s/early ’50s. That’s well long before the handheld tech era when New York became the first state to implement a law in 2001 prohibiting all drivers from talking on a hand-held cellphone while driving.

Not to downplay distracted driving, but we’ve coined the term “mindless driving” to describe what likely has a greater negative effect on drivers’ attention spans. Think about yourself for a moment…you likely have a myriad of thoughts going through your mind while driving…finances, relationships, kids, health, family, work, the list goes on.

Then toss in a Bluetooth/hands-free phone conversation, and there’s just no way you can keep focused on at what speed you are traveling. Especially if the conversation becomes heated! 😉 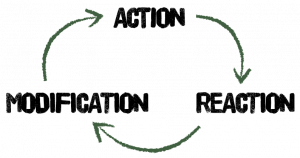 According to Wired Magazine, this process provides people with “information about their actions in real-time, then allow them to change those actions, pushing them toward better behaviors. Action, information, reaction.” In other words, drivers need some neurobehavioral activator or “trigger” to change their consciousness from a distracted or mindless state to an actively engaged state.

in your travels) had in a California school zone when even active police enforcement had previously failed.

With that same visual trigger of the speed signs in mind, it stands to reason that K40 radar detectors also act as an effective trigger to help you refocus on the task of driving and make you a safer driver…especially with some of the GPS technology-based features in our systems. Speed Monitor lets you set a speed and be alerted if that speed is exceeded. Our Mark to Alert feature is another useful trigger that you can use to be alerted to important locations like school zones.

Perhaps you’re saying to yourself, “but I don’t purposely speed.” And you would be telling the truth just like many of the 41 million other speeding ticket recipients in the US annually that were caught driving “mindlessly.”

When you consider the following driving statistics:

·         People typically do not realize when they are cognitively distracted. [Source: National Safety Council]

·         52% of drivers admit to engaging in distracting activities while driving, even though they know it’s wrong. [Source: Forbes.com/Consumer Reports]

the value of a K40 radar detector and laser jamming system is two-fold:

it keeps you from getting a speeding ticket while increasing your safety and other drivers when you truly weren’t intentionally meaning to speed and were being a human “lost” in thought.